It has been reported that Angel di Maria must slap in a transfer demand if he wants out of Manchester United. 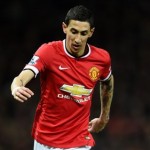 PSG are in talks with Di Maria about a move to Paris this summer.

But the Mail on Sunday says he will have to formally ask Manchester United for a transfer if he wants to leave Old Trafford.

United are not encouraging interest from PSG or anybody else and the message from club insiders here in America’s north-west this week has been very much that Di Maria is not for sale.

It seems that if Di Maria wants to get out of England badly enough then he will have to force the issue.