It has been reported that Anthony Martial almost missed his first start for Manchester United. 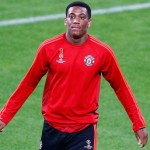 The 19-year-old French international striker made his full Red Devils debut in the Champions League group stage opener against PSV Eindhoven on Tuesday night but it could have been a different story for the French forward.

Martial was just moments from being left behind at the team hotel in Eindhoven as the bus pulled away for the Philips Stadion without him on board.

Luckily, the £36million summer signing rushed out of the foyer and onto the street in time to hop on board with the rest of teammates.

Unfortunately though, United suffered a 2-1 loss to the Dutch champions in a disappointing night which was further soured by the double leg fracture sustained by young left-back Luke Shaw.