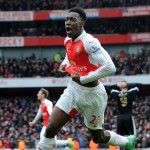 Reports are out claiming that Arsenal boss Arsene Wenger admits he almost left Danny Welbeck out of his squad for victory over Leicester City.

The former Manchester United forward hadn’t featured for the first team since April 26, but headed the all-important injury-time winner after being summoned from the bench on 83 minutes.

“Yes, on Friday morning I was not convinced that I would include him in the squad, because I planned to play him next week,” the boss said.

“I was going to give him one more week training, but his last two training sessions were so convincing that I decided to include him.

“It paid off today, and we are all very pleased for him.”