Reports are out claiming that Arsenal were trumped by Inter Milan for former AS Monaco midfielder Geoffrey Kondogbia. 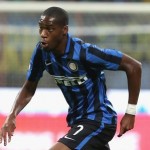 GetFrenchFootballNews.it reported that the Gunners made a serious bid for the France international last summer.

Wenger also spoke with Kondogbia directly, but in the end, they could not reach agreement over personal terms.

The midfielder is now part of Roberto Mancini’s Inter team.