Reports are out claiming that Manchester United were forced to kick up their offer for Monaco striker Anthony Martial after Arsenal joined the battle last week. 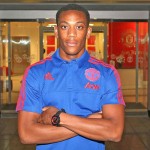 The Mail on Sunday reported that United’s chief executive Ed Woodward had been making steady progress over the weekend to bring Martial, just 19, to Old Trafford for a relatively modest fee of around £21.6m.

That was before getting wind of Arsenal’s interest.

Arsenal, short of a striker and having finally given up hope of landing Karim Benzema, had entered the bidding. Apparently Martial wanted to work with the great Arsene Wenger in the hope he could emulate the achievements of their record goalscorer Thierry Henry.

United, beaten at Swansea on Sunday and desperate for a striker to assist Wayne Rooney, agreed to pay £58m all in. Sources at Arsenal claimed manager Arsene Wenger was aware of Martial’s potential availability and is an admirer of his talent, but did not at any stage enter the bidding.

Wenger : Fabregas Can Be The Captain Of Spain!