Reports are out claiming that Arsenal boss Arsene Wenger had scouts posted for Genoa’s clash with Napoli yesterday. 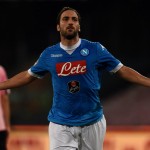 Gianlucadimarzio.com reported that the Gunners had representatives in the stands for the 0-0 draw.

It’s understood the subject of their attention were Genoa winger Diego Perotti and Napoli midfielder Jorginho.

The Argentina international has been linked with a move to the Premier League this season, amid talk of his contract carrying a £68 million buyout clause.