It has been revealed that Arsenal boss Arsene Wenger made an attempt to land Chelsea goalkeeper Thibaut Courtois two years ago. 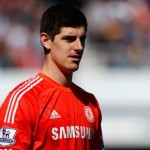 Wenger completed the signing of Petr Cech from Arsenal this week.

El Confidencial claims that Wenger anted to take Courtois on loan two summers ago, but Jose Mourinho blocked the move as he didn’t want the player to join a direct rival.

Courtois returned to Chelsea 12 months ago after three years on-loan with Atletico Madrid.