Reports are out claiming that Arsenal are yet to close a deal for Romanian whizkid Vlad Dragomir. 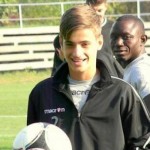 The Daily Mail reported that the midfielder, who arrives from ACS Poli Timisoara, will pen a three-year deal at the Emirates.

The Romania Under 16 captain had also been closely monitored by Inter Milan and Monaco, but the Gunners have pipped them to the line to secure his signature.

It is believed Dragomir, who turned 16 on April 24, found the Gunners the most attractive proposition as they are renowned for giving young players the platform to showcase their talent in the first team.

Timisoara are expected to receive a fee in the region of £100,000 in compensation.