It has been revealed that Real Madrid coach Carlo Ancelotti TWICE turned down Manchester United in LESS THAN A YEAR. 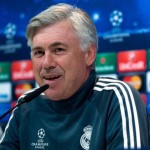 Marca says Ancelotti was approached by United before the end of the 2012/13 season about succeeding Sir Alex Ferguson as manager. The Italian’s time with PSG was coming to an end and he had yet to commit to Real Madrid.

Ancelotti, at the time, informed United his preference was Real and soon signed with the Madrid giants after meeting with the Premier League club.

It’s suggested Ancelotti was the United board’s No1 choice – ahead of Louis van Gaal – and they did not move for the Dutchman until after being rejected – again – by the Real coach.