It has been reported that Chelsea’s deal for Fiorentina winger Juan Cuadrado will eventually rise to almost £27 million. 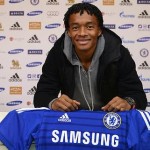 The Colombian international flew into London on Saturday and has now completed his move, penning a four-and-a-half-year deal.

The 26-year-old joins the Blues for an initial fee of £23.3million, which will rise to £26.8 million with bonuses.

The Blues had been negotiating with the Florence club for more than a week before agreeing terms. The clubs also agreed a five per cent sell on to Cuadrado’s former club Independiente Medellin. Ancelotti : David Luiz Will Be The Future Of Chelsea!