It has been revealed that Chelsea signing Pedro has revealed private phone conversations with Blues boss Jose Mourinho helped convince him to move to Stamford Bridge. 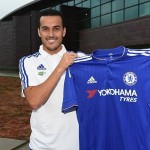 The former Barcelona forward turned down the opportunity to join Manchester United in favour of Chelsea for a reported £21.4million and he says Mourinho was the driving force behind that decision.

“He is one of the main reasons why I’m here,” Pedro told his new club’s official website.

“He phoned me a few times and said he needed me to make the team stronger.

“He has won titles wherever he has been. I am really looking forward to playing under him and hopefully winning more titles.” Carlo Ancelotti To Be Sacked If Man Utd Beat Chelsea