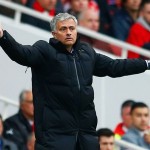 It has been reported that Chelsea manager Jose Mourinho and Arsenal boss Arsene Wenger did not speak to each other at all on Sunday.

The Daily Star reports that the Portuguese and French tacticians, who have a long-running feud between them, did not utter a single word before, during or after the 0-0 draw at the Emirates Stadium.

The duo forewent the customary pre-match and after-match handshakes and neither made any attempt to interact as the grudge between the pair continues to overshadow their teams’ great rivalries.