It has been revealed that Club Brugge coach Michel Preud’homme says an early goal and keeping Memphis Depay quiet will be key in beating Manchester United. 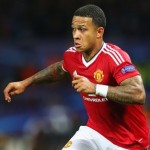 United are in Belgium for the second-leg of their Champions League qualifier defending a 3-1 lead tonight.

On Depay, Preud’homme stated: “We already had a plan at Old Trafford but it however only partially succeeded. He played well and had an exceptional game.

“If you want to have a chance against Manchester United, you should finish the perfect match.

“You cannot really put pressure on them. They are used to playing under pressure. They have it every minute, every day. Man, they can produce quality in any game situation. If they’re behind or in front, they continue to do their own thing.

“But an early goal can give us a greater boost. But Manchester United will do everything to score a goal early and so to administer their coup de grace. This I fear.”