It has been revealed that Barcelona defender Gerard Pique was sent off in Monday’s Super Cup for ugly abuse of the linesman. 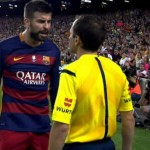 The Spanish international defender was dismissed for a tirade against Velasco Carballo’s assistant for failing to spot an offside against Aritz Aduriz.

After the match, Carballo’s report revealed why Pique was shown red. The referee wrote that he has screamed “me cago en tu puta madre” (“I s— on your whore mother”).

In post-match interviews, Barca teammate Sergi Busquets said that Pique had explained in the dressing room that he had only shouted “la puta”.