Reports are out claiming that Arsenal boss Arsene Wenger was able to convince David Ospina to stay after a heart-to-heart. 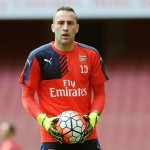 The Colombian international goalkeeper was ready to leave Arsenal after the Copa America following their swoop for Chelsea icon Petr Cech.

But sources close to Ospina say a charm offensive launched by Wenger and Gunners officials convinced him to stay.

“They made it clear to David that he was a priority and he had to stay,” said the confidant.

“We evaluated all parameters, and also knowing that he had four years remaining on his contract, he decided to stay at Arsenal.”

The source added to AS: “Arsenal did everything to convince David to stay.”