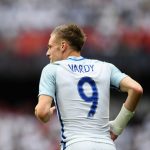 Reports have emerged claiming that Leicester City striker Jamie Vardy made the first move with Arsenal, it has been revealed.

The Mirror says Arsenal were sounded out last month about Jamie Vardy and told about the 29-year-old’s potential availability and that he wanted a four-year deal worth around £120,000-a-week.

They were cautious at that stage as they were concerned whether his season was a one-off and also about his age and the size of the contract.

But they have clearly decided to go for it, knowing that there is a clause in the Leicester contract which he only signed last season.

Leicester now may make Vardy a new offer and try to buy-out the escape clause, but they know it will be a battle now Arsenal have moved in. Arsenal Set To Move In For Werder Bremen Defender Per Mertesacker