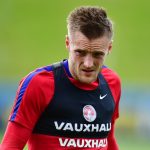 Reports have emerged claiming that Leicester City striker Jamie Vardy is having second thoughts over a move to Arsenal.

The Daily Star says he has spent the last 72 hours agonising over joining Arsene Wenger’s men.

But it is understood Vardy is expected to turn down a switch to the Emirates in favour of signing a new deal with the Foxes instead.

The news will be a hammer blow to the Gunners, who activated the release clause in his contract last week.

Wenger was prepared to hand Vardy a four-year-deal deal worth around £120,000-a-week.

But he held last-gasp talks with the Foxes before heading to France to prepare for Euro 2016, when club bosses made it clear how desperate they were for him to stay.