It has been reported that Chelsea boss Jose Mourinho is sure to be unimpressed by news his FA fine was handed down by an Arsenal fan. 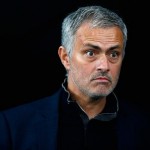 The Daily Mail says sports lawyer Nicholas Stewart, who chaired the commission which decided on Mourinho’s punishment, is a “well-known Arsenal fan”.

The news will rub salt into the wounds of Mourinho, who already has a fractious relationship with the north London club.

Stewart’s allegiances have caused problems in the past. In 2008 Sir Alex Ferguson was reported to be furious when Stewart was involved in handing former Manchester United defender Patrice Evra a four-match ban and a £15,000 fine for a post-match altercation with a groundsman after a defeat at Stamford Bridge.