It has been revealed that Manchester United had a deal in place for Benfica winger Nicolas Gaitan last summer. 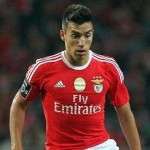 A Bola claims that United agreed a deal for the Argentine, but decided against it at the last minute.

The Red Devils were on the brink of bringing long-term Gaitan to Old Trafford for a sizeable £22m.

However, the arrivals of Memphis Depay and Anthony Martial convinced manager Louis van Gaal into backing out of the agreement.

Gaitan, 27, will start against Galatasaray in Wednesday’s Champions League Group C clash and hope to maintain Benfica’s 100 per cent start to the competition.