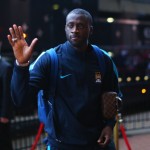 Inter coach Roberto Mancini made it no secret he wanted to sign the City midfielder.

Lombardo said, “There was a willingness on the part of Toure to go Inter this summer, everyone knew that he was the number one goal of Mancini.

“The player and Mancini agreed.

“Then obviously something went wrong between the clubs. ”