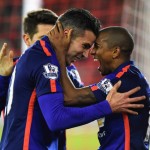 It has been revealed that Manchester United defeated Southampton at St Mary’s with just three shots on goal last night.

United were poor for large patches of the match and this was highlighted by the fact they only managed to muster three shots throughout – and all from the left-foot of Robin van Persie.

The former Arsenal striker struck twice for the 2-1 win.

The trio of strikes is the lowest recorded by the Red Devils in any Premier League game since August 2003, as well as by any side in England’s top flight this season.