Manchester United’s move for Real Madrid defender Sergio Ramos could still be ON! 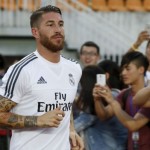 Cadena SER reports no agreement has been made over a new deal, leaving Ramos available.

The report has denied claims that Ramos and Real Madrid chief Florentino Perez have come to an agreement on terms for a new contract.

Ramos was thought to have rejected the chance to join United after shaking on a fresh deal at the Bernabeu, leaving United bosses frustrated and red-faced.