It has been reported that Manchester United refused to meet Juventus’ asking price for Arturo Vidal before Monday’s transfer deadline due to fitness concerns. 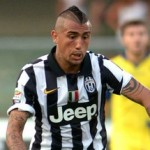 The Daily Star reported that despite their strong pursuit, and the explicit request of boss Louis van Gaal, United failed to get a deal done for Chilean ace Vidal.

It is said that the Italian giants were demanding £40m for the 27-year-old midfielder, a fee United refused to meet.

Concerns about the player’s ongoing knee injury, plus a turning of attention to other targets ensured a deal was not done, despite a deadline day upping of their offer.

Vidal was wanted by Van Gaal, who is keen on revamping the dressing room at Old Trafford after taking charge of the fallen giants earlier this summer.