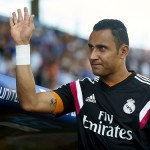 Reports are out claiming that Manchester United made a move to Real Madrid goalkeeper Keylor Navas last summer.

Marca reported that Louis van Gaal was not convinced by David De Gea before he took the job at Old Trafford – and was looking into signing possible replacements.

Although De Gea has excelled since, it is only because United were too late to try and sign Navas.

The Costa Rican had impressed at the summer’s World Cup, and there are rumours that Van Gaal could try and sign him again, if De Gea was to go in the other direction to Madrid.