It has been revealed that Manchester United made TWO offers for Bayern Munich striker Thomas Muller over the summer. 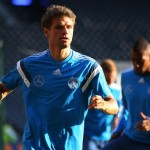 BILD claims that United offered Bayern Munich a massive £65m for the striker, after an initial £55m bid had been turned down.

The German international, who is known to enjoy a strong relationship with Louis van Gaal, was heavily targeted by United over the course of the summer, but Bayern Munich refused to part with one of their star players.

Bayern CEO Karl-Heinze Rummenigge said: “There are some players who just don’t have any price tag. We would be out of our minds to sell Müller.”