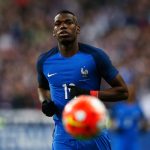 It has been revealed that Manchester United do not have a buy-back option on Paul Pogba, according to Sky Sports.

The France international midfielder left Old Trafford for Juventus in 2012 after failing to secure a regular first team place in Sir Alex Ferguson’s side.

Several British newspapers claim United are in pole position to re-sign Pogba – but it is understood they did not include either a sell-on clause or an option to buy-back the 23-year-old, meaning they would need to pay a fee widely reported to be around £80m.