It has been reported that Dimitar Berbatov was keen on a return to Manchester United this summer, it has been revealed. 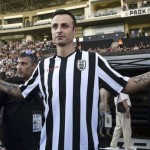 The Sun claims that United rejected the chance to re-sign former striker Berbatov to help ease their striker crisis this summer.

Berbatov was available after coming off contract at AS Monaco.

The Bulgarian’s agent approached the club in the summer, but the Red Devils were not interested and Berbatov signed for Greek side PAOK.