It has been revealed that Manchester United were keen on AC Milan goalkeeping sensation Gianluigi Donnarumma. 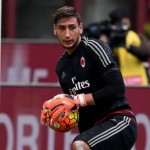 The 16-year-old made history yesterday as he started for Milan in their game against Sassuolo, becoming the youngest player to start a Serie A game.

Calciomercato.com says United spoke with Donnarumma prior to him signing his professional deal with Milan.