Reports are out claiming that Manchester United’s new bank-busting kit deal means they can afforded to buy any player in football – including Barcelona star Lionel Messi. 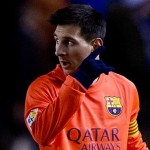 Reports in Spain have claimed adidas, who sponsor Messi, would help fund a £200m move to United.

And a United source, discussing the adidas agreement, told the Daily Mail: “It’s no secret that after this, nobody is off limits.”

The source said that United’s agreement with adidas may well make them an attractive proposition for the Argentina star.

“It certainly would not hinder it,” they added.