It has been reported that Manchester United’s £60 million winger Angel di Maria wasn’t always worth millions in transfer fees. 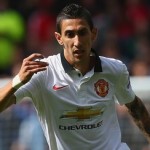 Di Maria, 20 years ago, was once traded for 26 footballs by his junior club.

The Sunday Mirror revealed that in 1992, doctors in the El Churrasco district of Rosario where the winger grew up advised his mother, Diana, to get four-year-old Angel involved in football to help control his hyperactivity.

She took him to El Torito – a junior club that wears orange shirts in tribute to Holland’s ‘Total Football’ World Cup squad of 1974.

After scoring 64 goals in one season, Di Maria was spotted by Rosario Central scout Angel Tulio Zof, who agreed to hand over 26 new footballs to El Torito as a thank-you.

He signed for Rosario four days before his seventh birthday and El Torito president Jorge Cornejo recalled: “We couldn’t ask for money for a kid of his age, so they agreed to send us 26 footballs.

“Unfortunately, they reneged on the deal and we received nothing in the end.”