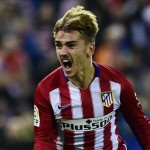 The France international is high on Jose Mourinho’s shopping list as he plans a major overhaul of the Chelsea squad.

However, Le 10 Sport claims that Bayern Munich are also interested in Griezmann.

The German giants plan to sell Arjen Robben and replace him with Griezmann.

For his part, Atletico president Enrique Cerezo insists Griezmann will not leave for less than €80 million.

Arsenal and Manchester United are also said to be interested in the talented winger. Watford’s Troy Deeney Happy To Be Linked With Arsenal