Borussia Dortmund defender Mats Hummels has admitted that a chat with new coach Thomas Tuchel convinced him to stay. 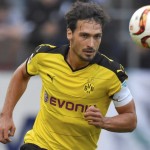 The German international was expected to join Manchester United this summer before announcing his about-face.

“We had a talk during the time when I was still considering my future,” Hummels told Kicker.

“I liked what he said to me and the way in which he said it.

“He told me about all my mistakes. If a coach wants me to stay, then I think it’s good that he doesn’t just butter things up, but actually tells the truth.”

Rooney : I Know The Goals Would Come For United