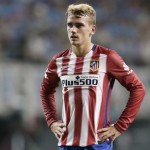 It has been reported that Antoine Griezmann will not join Manchester United before the close of the transfer window.

That is the opinion of Sky Sports‘ Spanish football expert Guillem Balague who has denied rumours that perhaps the French forward is set to leave Atletico Madrid to sign with United.

24-year-old Griezmann has been the subject of speculation throughout the summer transfer window but Balague has made it clear that the former Real Sociedad star is going nowhere.