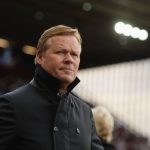 Reports are out claiming that Ronald Koeman is believed to be Arsenal’s top target to replace manager Arsene Wenger.

The Sun is reporting that the Southampton boss is the man Gunners chiefs believe to be the perfect long-term replacement for the Frenchman who is football’s longest serving manager.

As speculation regarding Wenger’s time in charge at the Emirates Stadium continues, reports are constantly emerging as to who will take the baton from the 66-year-old and lead the North London club back to Premier League glory.

Many names have been mentioned with the Gunners post, such as Diego Simeone and Laurent Blanc, but it is felt that the tactical nous and similar philosophy to Wenger that Dutchman Koeman possesses makes him a very appealing prospect.

Arsenal owner Stan Kroenke and chief executive Ivan Gazidis are believed to be prepared to continue backing Wenger until he decides to step away from the coaching caper but that has not stopped them from making a contingency for the future. Arsenal On The Brink Of Signing Villarreal Defender Gabriel Paulista