It has been reported that Manchester United have had new signing Anthony Martial watched for the past 12 months. 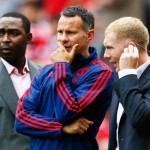 The Manchester Evening News claims that assistant manager Ryan Giggs had been keeping tabs on Martial, who was dubbed ‘one for the future’ by the Welshman.

But strong interest from the likes of Paris St-Germain, Barcelona and Chelsea led to United making their move now.

Manchester City were also said keen on Martial, and top brass at Old Trafford feared being gazumped by their wealthy competitors in January.


Krystian Bielik Happy Playing At Centre-Half For Arsenal U21