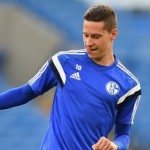 Schalke midfielder Julian Draxler has admitted that he wanted to join Arsenal in January.

The German international spoke about the speculation surrounding his future in a very brief interview with ArsenalFanTV‘s Moh Haider last week.

When asked whether or not the rumours of a move to the Emirates were true the German said: “Yes.”

And when asked if he wanted to move to north London he gave the same response. Sami Khedira To Turn Down Arsenal For Chelsea Move