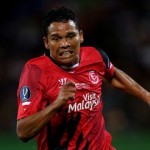 It has been reported that Sevilla refused to do business with Arsenal yesterday over striker Carlos Bacca.

AS claims that Arsenal spent much of yesterday trying to open talks with Sevilla over a price for the Colombia international.

However Sevilla president José Castro insisted there was no chance of Bacca being sold on deadline day.

“We will absolutely not listen to offers,” he declared.

“A salary increase for Bacca? That is an internal matter.”