It has been revealed that Manchester United snapped up Bastian Schweinsteiger for chump change. 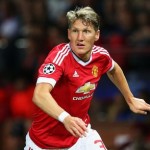 The former Bayern Munich captain made the move to Old Trafford earlier this summer.

BILD claims that Schweinsteiger cost United only €9m to buy from Bayern this summer, and not the €18m that had initially been reported.

The midfielder has enjoyed a 100 per cent winning start to his United career this season.