Jose Mourinho has told Chelsea fans what song he wants to hear from them this weekend. 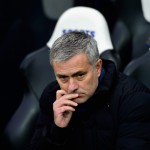 The Portuguese tactician has been reflecting on their first defeat of the season at Newcastle United.

“The good thing is that when we start the game next week against Hull City, if they [the Chelsea fans] want to sing something the best song that they can sing is ‘We’re top of the league’.

“The players have the same mood as me, not jumping with happiness, but accepting the defeat as part of the game.

“They tried everything. They were unlucky, they were not happy with that, but that’s football.”

The Portuguese was unhappy with the atmosphere at Stamford Bridge earlier in the season, but he had no such grumbles following the Newcastle defeat.

“They were good,” he added. “They pushed the team, I think they read the game and I think that they saw that the team was trying everything and that they deserved their support.”