It has been reported that Manchester United boss Louis van Gaal says he’s signed Daley Blind to play in midfield. 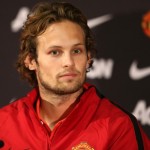 The former Ajax captain played at fullback for Van Gaal’s Holland in the World Cup.

“He is a player who can see situations in advance,” the manager told MUTV.

“He can [therefore] always pass to the free player, and when he doesn’t have the ball, he knows when he has to press the opponent. That’s a very good ability to have.

“I like him as a defensive midfielder, but he can also play in central defence or at left full-back.

“He can run for 90 minutes too and is always fit. That’s another very good quality for a player.”