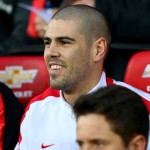 Unconvinced by Rafael, Van Gaal is in the market for a new right-back and TMW says he has made contact with Alves’ camp about the prospect of moving to Old Trafford.

The fullback’s deal expires in June and he is expected to leave the Nou Camp in the summer.

Interestingly, new United goalkeeper Victor Valdes is close to Alves, who complained about the decision to allow the Spaniard to leave last summer.