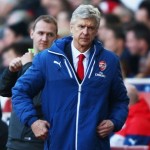 Arsenal go to Old Trafford on Monday for the FA Cup.

“The most memorable? You were involved in it,” Wenger said jokingly to Keown on BBC Sport. “Of course that famous incident with the penalty with Van Nistelrooy.”

Ahead of Monday’s clash, Wenger admitted he didn’t know where his FA Cup medals from previous successes were.

“Medals, I don’t even know where there are,” said Wenger. “That tells you that I don’t look back. The human side of the game is more important to me as opposed to the medals.”