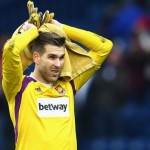 Reports are out claiming that West Ham United goalkeeper Adrian went into their defeat with Arsenal nursing a dislocated finger.

The Hammers lost 3-0 but the Spaniard produced a string of outstanding saves from Theo Walcott, Aaron Ramsey, Alexis Sanchez and then from Danny Welbeck in the last minute to prevent his team from a heavier defeat.

West Ham No2 Neil McDonald revealed: “He’s been a brave lad today because he could easily have pulled out. And he’s made some great saves. He has his finger strapped up to play and I’m hoping that if he played today he should alright for next week.

“He did it in the warm-up but he wanted to carry on. I haven’t ever dislocated my finger so I don’t know how much pain he was in but it’s obviously a big thing for a goalkeeper.”