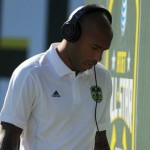 The 37 year old announced he is hanging up his boots following a prolific career on the front lines at Arsenal, Barcelona and New York Red Bull.

However Delap admits his hand-ball which denied the Republic of Ireland World Cup qualification in 2010 still burns.

He told BBC Radio 5 Live: “There are a few greats who spoil that with what they do. I’m sure he regrets that.

“There is still a lot of feeling back home. The fact that people stopped buying Henry hoovers shows how far it went and how horrible a thing it was to happen to the country.

“You don’t mind getting beat by greatness – and that is what he had – but it is disappointing that people remember that over all the great things he did.

“But that will in the top players is to win at all costs and sometimes you have to take the bad with the good.” Borussia Dortmund Not Interested In Selling Matthias Ginter To Arsenal