It has been reported that Barcelona sports chief Andoni Zubizarreta went against medical advice to sign Thomas Vermaelen. 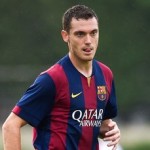 TV3’s Esport Club reports the former Arsenal captain’s Barca medical lasted longer than usual – almost a day – and in the end medical staff recommended he undergo surgery before any transfer was done.

But Zubizarreta ignored the advice and pushed ahead with the deal. It’s suggested he was convinced Vermaelen could avoid surgery by working with the club’s physios.

However, three months on, Vermaelen has managed just an hour for Barca B – in a friendly.

There is hope he could make his competitive debut in the Copa del Rey tie with Huesca next month.