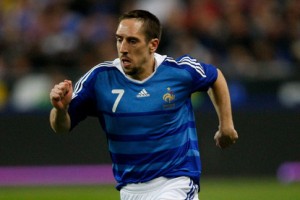 Bayern Munich winger Franck Ribery has admitted that he is tempted by a move to Premier League clubs Chelsea or Manchester United.

Manchester United and Chelsea are known admirers of the France international winger but the Premier League’s top two are likely to face competition from Spain.

Ribery told reporters that Bayern Munich is still a big club and that it is one of the biggest in the world but he believes that the team is not as strong as other teams, like Barcelona, Real Madrid, Manchester United, Chelsea.

He added that Bayern will have trouble competing against these teams.

Ribery went on to say that he want to win trophies and to enjoy himself.

He also said that he is not 20 any more and that he is closer to the end of his career than the beginning.


David Villa Hopes To Join FC Barcelona In The Summer