Reports are out claiming that Ricardo Kishna is delighted with his move to Lazio. 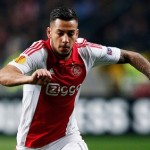 “I’m looking forward to experiencing the freedom the attacking players play with at Lazio,” Kishna revealed.

“It’s much more dynamic compared to what I’ve been used to recently at Lazio. The Coach [Stefano] Pioli sees a role for me across the attack, including in the number 10 role.

“I often played that position in the youth teams, and I enjoyed it very much, though now I want to concentrate on the left wing, although I can also play on the right.

“In Rome I can play with creativity, and have a better chance in attack. The Coach has asked me to express myself, but to press when the ball is lost.”