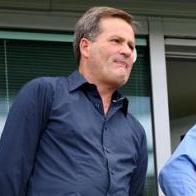 Keys apologised for making the disparaging remarks about female assistant referee Sian Massey but insisted he was prevented from making his apology public. He described the remarks as “lads mag banter”.

Keys told talkSPORT: “There are some dark forces at work here.

“I rang Sian on Sunday an apologised. I realised how deeply wrong we were. Having done that I asked ‘could we make people aware that of that fact we had a conversation and that both parties felt it was right to move on’. I was told ‘no’.

“Then 24 hours had past by which time the world had gone mad. I don’t know why I was told ‘no’ and stopped from telling people what I had done.”

Richard Keys has since quit as Sky’s football anchorman.