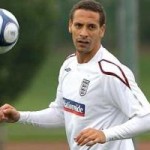 This of course comes just before this weekend’s derby game between Man Utd & Man City.

The Argentina international has scored 22 Premier League goals for Roberto Mancini’s side, but England defender Ferdinand has mischievously suggested that the energy Tevez shows on a matchday is not necessarily reflected in his attitude to training.

Ferdinand said: “Carlos is an interesting character. When he was at United, he saved all his energy for the games – he didn’t really go over the top at training.

“He worked hard in the gym – he was a professional in that sense – but everything he did was geared towards the match at the weekend.

“You could see him conserving his energy during the week and then laying it all on the line out on the pitch.”

Ferdinand added in The Sun: “That’s not the way I operate, I have to train at a high level every day. But it works for Carlos and he can be a real handful to defend against.”