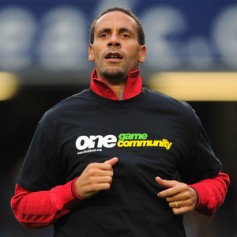 Rio Ferdinand has taken aim at Arsenal’s away fans after victory yesterday.

Robin van Persie was taunted throughout by visiting fans but he did not antagonise them further by celebrating his goal.

The Manchester United centre back said on MUTV: “He showed a bit more class than probably their fans did to him, but it is banter from their fans and he celebrated in the right way, I think.”